Backlight your Game Boy Color with this trim-free, solder-free LCD solution. It's never been easier to enjoy your favorite GBC games on a beautiful backlit screen.

For a polished aesthetic, pair this kit with one of our custom Game Boy Color glass screen lenses.

Fantastic. Makes playing the old games of my childhood bearable.

Great little screen, and easy to install. As the description says, no soldering or modding required.

The touch sensor to control the brightness seems to work on my solid purple GBC even though it’s not on the IR sensor side. It’s nice because I didn’t have to remove or cover the IR sensor.

The only problem was that I was initially sent the wrong screen kit so I was unable to install the first screen I was sent. But after emailing customer service they sent me a label to send it back and sent me the correct screen kit shortly after. Not ideal that I was sent the wrong screen at first, but the process to return it and get the correct one was very smooth.

Nice quality screen, slightly smaller then the normal one but its not that bad at all. I don't notice it. and it looks great!

Excellent TFT display, easy to mount, good quality and adequate battery draining. Thanks a lot for this!

This kit was pretty simple to install. There were a few minor problems I had with it:

2. Like others mentioned, the touch light sensor is on the wrong side. I have an Atomic Purple case so it still works through the transparent plastic, idk if it would work through an opaque case.

3. The 3D printed bracket is very nice for simple placement. However, I had to make a modification to the bracket. It would not fit in my OEM atomic purple case: at the bottom there's a small bump so I had to cut a gap in the bracket in order for it to fit. (Attached a photo)

Otherwise it was a simple install and works great so far. These are minor inconveniences so still giving 5/5. 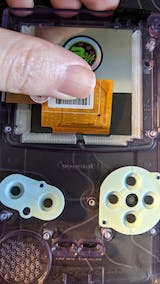 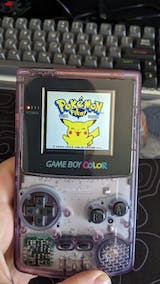 Thank you for this complete review!

We are aware that we need to update quite a few tutorials for a few products. We are working on this.

For the sensor on the other side, it will indeed work with opaque shells too! We actually prefer this position for the sensor as it lets you keep the IR sensor!

Thank you again for this great review!